The IAHV Prison Program (previously known as Prison SMART) is an internationally renowned stress management and rehabilitation program that teaches effective, evidence-based programs for the entire Criminal Justice community. The IAHV Prison Program has been shown to reduces stress, heal trauma, and provides practical knowledge of how to handle negative emotions in order to contribute to society in a positive way.

The mission of the IAHV Prison Program Prison is to make a life-transforming difference in the lives of all people working in, or incarcerated within, the criminal justice system  with tested programs that transform the mindsets, attitudes and behaviors of offenders, thus aiming to break the cycle of violence in our societies at the root and reducing reoffending.

The prison population has overwhelmed the corrections system and is fueled by repeat offenders. Ex-offenders find that freedom from the impact of incarceration does not end at the moment of release. Many will recidivate within a year of release. Families of the incarcerated are also ‘doing time’. The burden can be crippling.  Prison staff, on a daily basis, work under incredibly stressful and dangerous conditions. In fact, Newsweek reports, “Prison Employees Face Same Rates of PTSD as War Veterans, New Research Claims.”

As The Second Chance Act (Fact Sheet) explains, “Nearly all of the 2.2 million people incarcerated in the United States will be released at some point. People who are returning to their communities after prison or jail have complex challenges and needs that contribute to the likelihood that they may return to incarceration.”

The cornerstone of the program is advanced breathing techniques, including Sudarshan Kriya (SKY), which removes stress from the physiology and has been shown to have numerous physical and mental health benefits – as documented in over 70 independent peer-reviewed scientific studies and numerous self-reports surveys. The patented techniques have been proven to be an effective treatment for PTSD, depression, and anxiety. In addition, it has been shown that practitioners experience a decrease in violent behavior.

The IAHV Prison Program has been offered worldwide through our partner, Art of Living Foundation, in over 60 countries and has benefited 700,000 people.

Trained instructors deliver the course in approximately 15 hours, spread out over 5 days.

Other components of the program include physical stretches, meditations and cognitive behavioral techniques for maintaining positive behaviors and attitudes that lead to physical relaxation and calmness.

Participants learn a personal practice that can be used on their own daily to further establish the benefits that makes the program sustainable and cost-effective. Participants report experiencing states of calm, peacefulness that grow the more they practice.

After the initial IAHV Prison Program training, follow-up sessions and more advanced trainings can be conducted, as the benefits increase with continued use. The phases include: IAHV Prison Program Course, Part Two Silent Retreat, Meditation Courses, and Peer Mentoring Course. 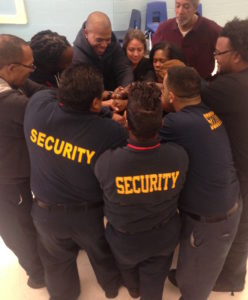 The IAHV Prison program is currently active in the following countries and continue to grow.

The IAHV Prison Program is implemented by IAHV in collaboration with Art of Living Foundation.